Horror works pretty damn well on in film we know that but how has it fared on the stage? Without editing, special effects or camera tricks? Here’s three of the best.

The Woman in Black
Terrorizing theatre audiences since 1987 The Woman in Black is a very British ghost story, about young lawyer Arthur Kibbs and based on the 1983 novel by Susan Hill is reminscent of The Innocents or the BBC’s A Ghost Story for Christmas specials.

The stage play approaches the story in a very different way to the film, it’s actually quite meta. A play within a play, opening with the older protagagonist Arthur Kipps reading a manuscript of his story documenting his experience with the woman in black, a malicious and vengeful spirit. He meets the actor who is to play him in The Woman in Black and they act out the story with the actor playing Arthur and the real Arthur playing the supporting characters. As the two act out the story the doors around the theatre creak and bang and the woman in black herself begins making appearances within the story…and within the audience… yeesh! A terrifying experience.

Evil Dead: The Musical
And now for something completely different… Evil Dead the Muscical is a Canadian production that bases itself mainly on Evil Dead 2  but also includes elements from the others such as the tree rape scene from number one, strangely played for laughs but they pull it off.

Is it scary? Well apart from a few jumps…no… but apart from a few jumps neither is Evil Dead 2. What it is is a thrill ride of a show, like a silly old ghost train and it’s funny… very funny, with dialogue you wish they had in the films such as this exchange after an attack from Ash’s possessed severed hand:
Annie: Eew! That’s gross we have no idea where that hand’s been!
Ash: Actually babe I know exactly where that hand has been because that’s my hand!
(shows her his stump, turns to the audience)
Ash: …but it’s still pretty gross. Any production attached to Evil Dead wouldn’t be complete without the blood and EDTM is gushing, probably the bloodiest stage production in existence, so much so that there’s a “splatter zone” the preferred seats for hardcore fans, right in front of the stage where you get to be splattered with blood along with rest of the cast the cast. It’s a hella lotta fun

On top of the comedy and blood is of course the songs, it’s a musical after all and they’re quite catchy, every time a character is turned into a deadite we get a blast of the reoccurring tune “Look who’s evil now”! but the stand out is “What the fuck was that?!” …a tune which sums up the state of… actually just watch it.

Ghost Stories
A British production written by Jeremy Dyson of The League of Gentlemen fame is a vignette type story, told in the form of a lecture by Professor Phillip Goodman, a Professor of Parapsychology who wants to discuss the pychosis of people who have had ghostly experiences. He has taped three interviewees, each with their own story, as each recording is played it’s portrayed on stage in the first one- actually I have to stop there, Ghost Stories has a “give nothing away” policy, it asks to keep the surprises underwraps… there’s not even any stills from the production available, the best I do to break up all this text is this: 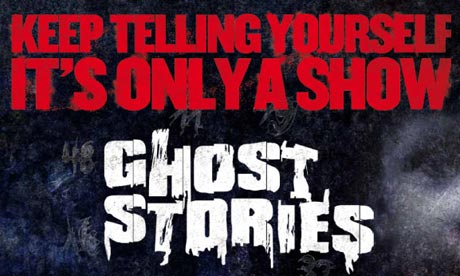 From what I can see there’s no current productions but it may re-emerge at any stage. I will say that it’s terrifying, it’s 80 minutes with no intermission and no toilet breaks (or you’re out!) of nasty psychological horror with some incredible on stage effects. Throughout it individual people can be heard screaming in the audience… what was making them scream? No idea. It chills many senses… even smell, I’ll leave it at that.